My app, Discord Bot Studio , is a visual programming tool for creating chatbots for Discord. The application runs on Desktop, and is distributed on Steam, since that’s where my target audience hangs out. The product had been selling decently since its release in May 2020, but I was constantly looking for ways to drive more traffic to it. After trying lots of marketing strategies, to varying degrees of success, I realized that I may be able to increase the number of copies being sold without bringing more people to the page. Obviously, the way to do this is to increase the conversion rate.

I decided to create a new trailer for the application. On Steam, the first thing you see when you view an app or game is the trailer. The existing trailer for DBS was something I threw together quickly before launching, and didn’t actually show the application in action. That meant that any new comers to the page would need to click around to see how the app worked. 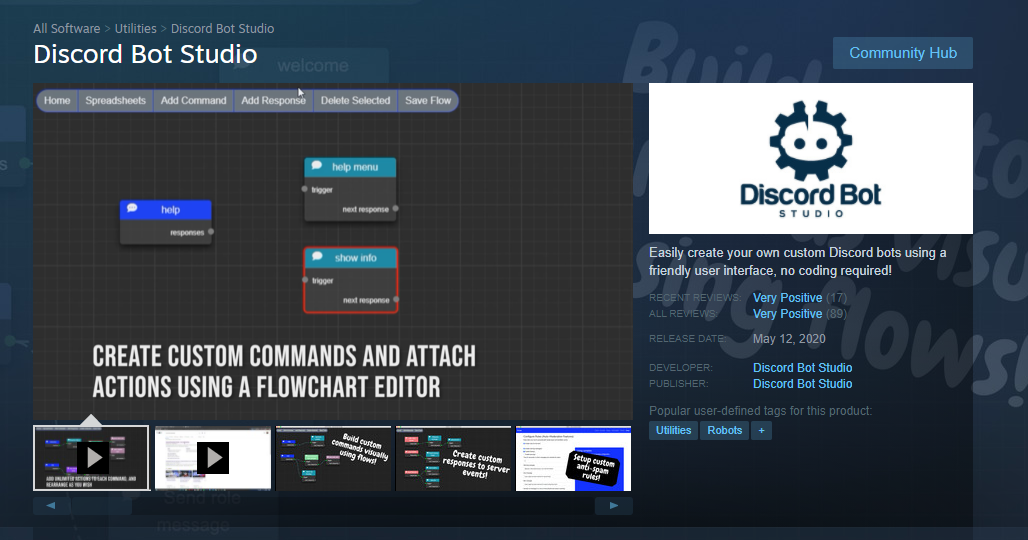 See how the trailer is front-and-center when viewing the app?

With this in mind, I decided to spend a few days making a new trailer. I spent some time learning the basics of Premiere Pro, and wrote an outline for a video which would show the important features of the application. In less than a week I had this trailer completed. As you can tell from the video, it’s not a work of art and I’m not going to be winning any awards for my editing skills. However, I was confident that this trailer did a much better job showcasing the features of the app in a concise way. I uploaded the trailer and waiting to see how it would be received.

Difference in conversion rate from old to new trailer: 2.27% !!

For under a week’s worth of work (< 2 hours per day) I have seemingly increased conversion rate by over 2%. I will continue to monitor the conversion rate to make sure I get a better sample size, but the results are promising so far.